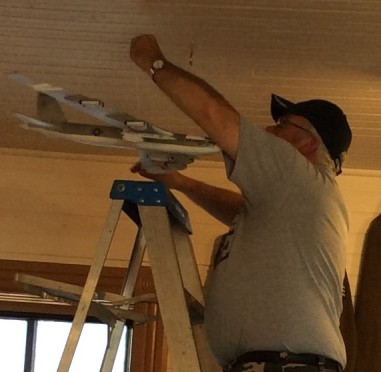 In July, 2018, Tom Sybert gave his second presentation on the 1966 B52 bomber crash in the Stone Lake Area.  In the afternoon, he installed in the museum garden a replica of the crash memorial which he placed at the crash site a year earlier.  At the same time, Russ Voight, a retired member of the Air Force SAC, hung a handsome model of a B52 bomber in the museum (photo above).  Russ and Tom worked on this model for a year and Tom Sybert made all of the decals for the model.  Russ helped Tom with a memorial booklet which they gave to the Stone Lake Area Histoical Society to sell.  We greatly appreciate all of their time and generous donations to the museum. 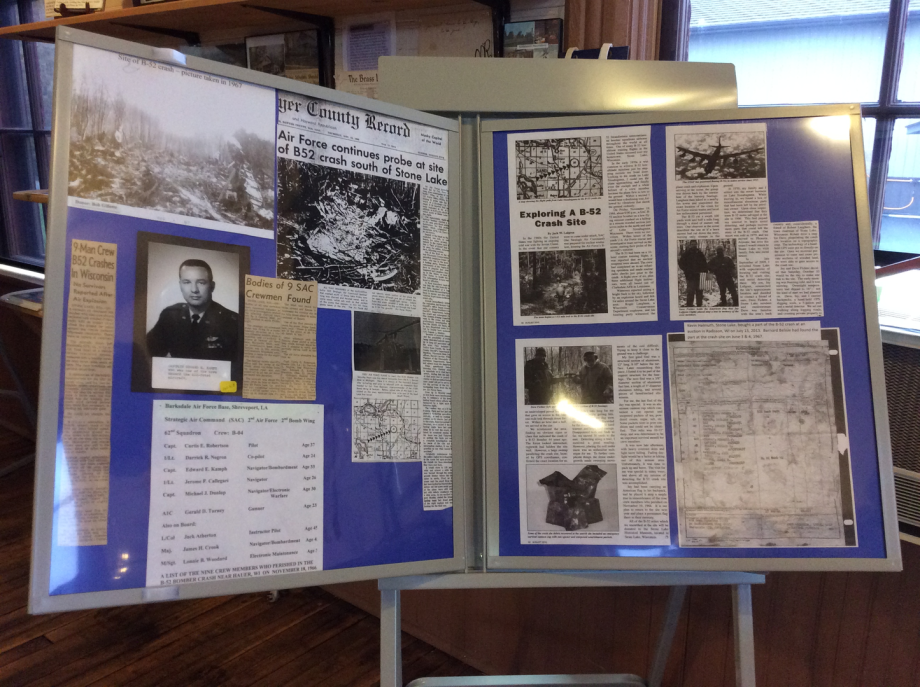 This display unit (photo above) in the museum is dedicated to honoring the memory of those airmen who died in this plane crash in the Stone Lake area and preserving the history of the event.  Members of the airmen's families have visited the museum and viewed all of the news articles and artifacts that have been brought to the museum from the crash site.

Tom Sybert, a young boy in Stone Lake when the crash occurred, has made it his goal in life to preserve a true history of this event.  Not only has he visited the crash site many times, and placed a memorial plaque at the site to honor the airmen (see the two photos above); he has given two presentations in Stone Lake for the Stone Lake Area Historical Society and has created a memorial for the historical society as well as a beautiful, full color memorial book which can be purchased at the Stone Lake Historical Society Museum.

These are just some of the items (photo above) from the crash site that have been brought to the museum over the years.  Most recently we were given the radio from the B52 and the mounting bar for the chaff dispenser.  All of these items were found by individuals after the crash occurred.  It is interesting to note that some articles have just worked their way up through the swampy ground to be found as recently as October, 2017, by an electrical work crew.

What an exciting day August 5, 2017 was at the Stone Lake Lions Park!  We had a huge turnout for the Family Reunion Picnic.  Approximately 200 folks turned out, some of them not having seen their classmates for many, many years.  The Boylan School decided to have their own reunion that day, as part of Stone Lake's Family Reunion and a huge group of folks who had attended Boylan School also spent the day reminiscing.

This was not a fund raiser for the historical society, it was an event to encourage the entire community to get together, and that certainly happened.  A $5.00 meal turned out to be a delicious picnic and games were provided for the children attending.

Everyone there said they would be happy to attend anothger reunion like this one and while none is planned at this moment, the historical society said they might consider doing this again in the future.  Watch the website and the newsletter for information. 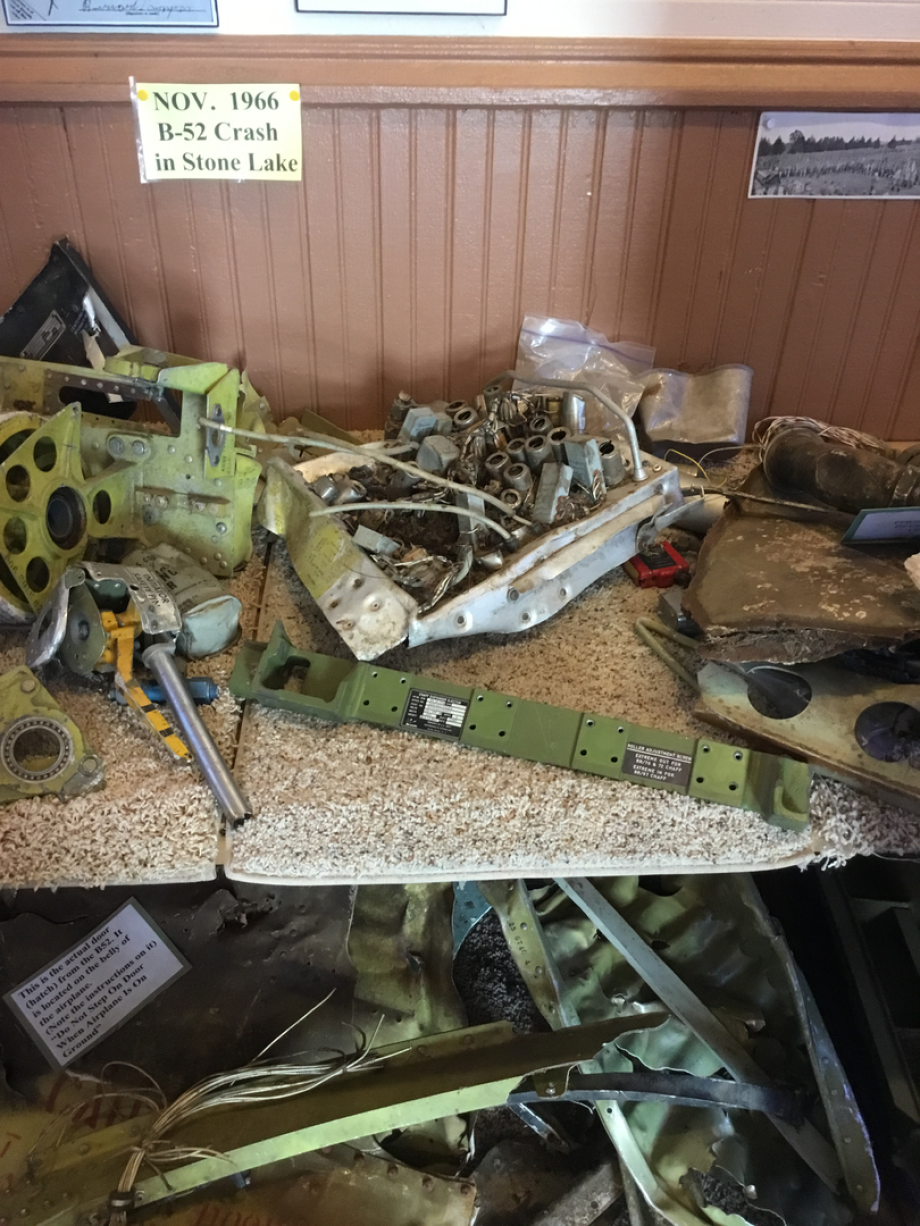 In 2016, realizing that Stone Lake is steadily losing its brave pioneers and their offspring, a special project was undertaken by the historical society. A very serious effort was made to document the location of original pioneer homesteads, and provide location maps and details on each homestead and family. In this new book, “Pioneer People and Places in Early Stone Lake” (book cover pictured above), Stone Lake’s earliest families, 67 in Washburn County and 68 in Sawyer County, have now had their first home site described by section, range, and township, and located by number on a series of 1915 and 1919 plat book pages. The details on these pages make it possible to walk, bike, or drive to the original location of 135 different pioneer homesteads, as well as the oldest schools, resorts, businesses, churches, and other Stone Lake landmarks. 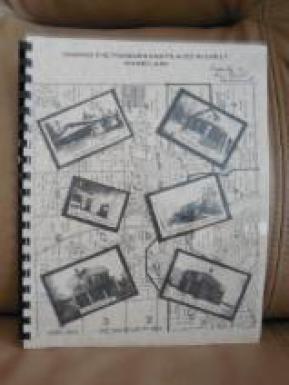 The first printing of the book sold out in two weeks, and we apologize if you were not able to purchase one for your family. A second printing has now been completed and is available at $15 per book if you are able to pick it up in Stone Lake, or $17.50 if it must be mailed to you. And, if you are planning to give one or more of these as Christmas gifts, call Connie Schield and she will help you make arrangements for purchase. Her phone number is 715-865-4940.

OUR FIRST STONE LAKE TOWN HALL HAS BEEN SAVED:

The "Stone Lake Area Historical Society" has acquired the very first Stone Lake Town Hall!! Built in 1926, it was located deep in the woods several miles from town. In November, 2009, it was moved to the site of our depot/museum. In the summer of 2010, this historical building was joined to the museum and restored, to serve as a much needed additional display area. The addition, which joined the two buildings together, is known as "Preservation Hall," and this large room holds a special "Wall of Honor" where all who make this preservation project possible are honored. 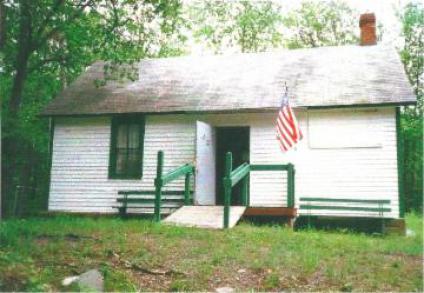 Pictured above is the original Stone Lake Town Hall

A photo of the newly restored town hall is shown here, joined by Preservation Hall to the original depot/museum. Thanks to the efforts of many volunteers and the donations of many supporters, this huge project was completed exactly as planned, by October 2, 2010, in time for Cranberry Festival weekend! 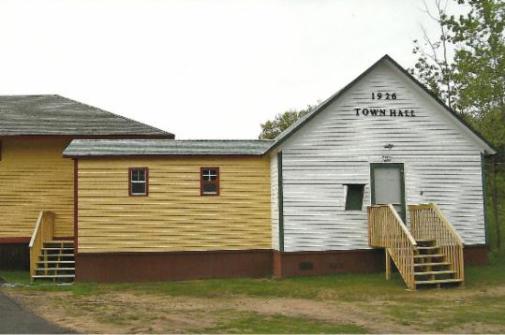 On October 2, 2011, we were able to declare the depot museum, Soo Line Caboose, and Town Hall projects entirely free and clear of all debt! Please stop by any Friday, Saturday, or Sunday, between 12:00 PM and 4:00 PM to tour our unique museum compex! We are open from Memorial Weekend through Cranberry Festival Weekend in October each year.

On 2013, our 1913 caboose reached its 100th birthday and the decision was made to give it a much needed face lift. Once a few boards were removed, it was determined that more than a simple face lift was needed. So, a restoration began. 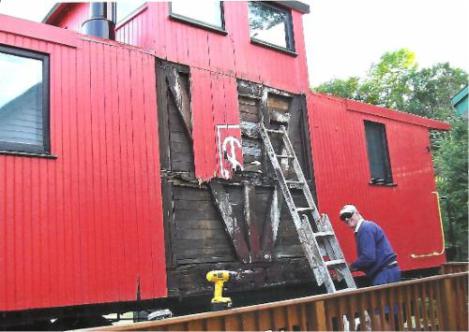 Tom McDonnell got a big surprise when he looked beneath the exterior siding. The job was more extensive than expected.

The first job that was done was a new coating on the roof to make sure that everything was well sealed so no water could get behind the old or new siding on the walls. Bob Gillette and Tom McDonnell completed this portion of the job, working hard to make sure everything was sealed properly. It took approximately two weeks of hard work on a very hot and sticky roof.

Next, a portion of deteriorated siding was removed from the north side and it was discovered that repairs were needed to the interior before siding could be replaced with new tongue and groove siding. After these extensive repairs, the siding was replaced and all joints were sealed. Tom McDonnell was responsible for this portion of the job, which took the better part of a month. 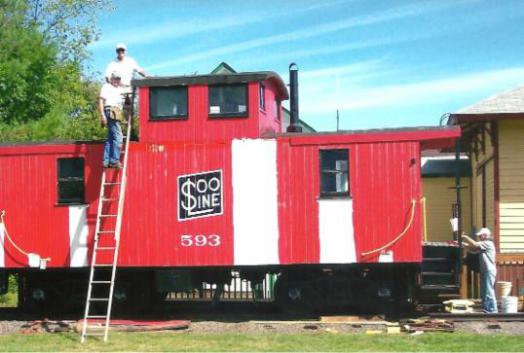 Bob Gillette and Tom McDonnell are working on the roof, while Jay Lofgren cuts and fits new siding into damaged areas at the east end of the caboose.

As work progressed, portions of some boards had to be carefully cut to fit, and then replaced. Jay Lofgren jumped in and tackled this time consuming "cut and fit" job. Jay worked on this job while Tom McDonnell continued to make repairs around the east and west ends of the caboose finishing after approximately one-third of the siding was replaced on the south side. 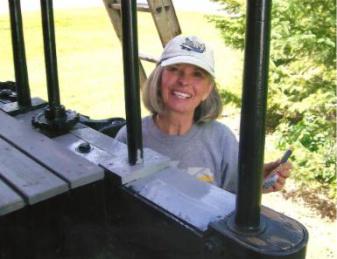 Judy Gillette was still a ray of sunshine after many hours of painting in the hot summer sun.

When everything was back together and all repairs completed, the full caboose was primed and then painted in its color, Vermilion Red. Judy Gillette played a big part in helping Tom McDonnell with this huge job, cutting around all ancient bars and bolts. Of course, all of these repairs to the siding, most of them in the middle of the north and south sides, meant that all SOO Line signage had to be re-done. Carol McDonnell took on this job for the second time and by September of 2013, the entire job was done and the caboose was in tiptop shape again.

SOO Line caboose No. 593 after its restoration. What a beautiful sight and what a great job to have behind us!

The full project from start to finish took approximately two months, and not one dollar was spent on labor; thanks to our wonderful volunteers. Additionally, a plea that went out in the historical society newsletter in the fall of 2012 and spring of 2013 resulted in donations of $980 which covered 95% of the material cost.